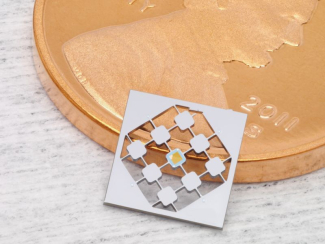 The process of developing a quantum computer has seen significant progress in the past 20 years. Quantum computers are designed to solve complex problems using the intricacies of quantum mechanics. These computers can also communicate with each other by using entangled photons (photons that have connected quantum states). As a result of this entanglement, quantum communication can provide a more secure form of communication, and has been seen as a promising method for the future of a more private and faster internet.

Quantum computers manipulate qubits (quantum bits) of information in order to solve problems. As qubits are quite fragile, any environmental noise in the system can render them unreadable. Often, superconducting qubits are used for quantum computing and are designed to operate at specific frequencies, called microwave frequencies, which have low energy. In order for these superconducting qubits to work, they need to be kept at very low temperatures. The systems that cool the qubits to low temperatures are extraordinarily difficult to scale up in size, posing a significant challenge to long-distance quantum communication systems. To override this problem, JILA Fellow Cindy Regal and her research group collaborated with JILA and NIST fellow Konrad Lehnert and his research group to create a special transducer that can send information from microwave frequencies to optical photons, which don’t require low temperatures.

In order to supply the energy needed to promote microwave signals to optical frequencies, any such transducer requires a strong laser. Unlike their previous devices and other competing technologies,  their new transducer was  not affected by this laser light, giving the entire system less environmental noise. Previous work from both teams had already decreased the noise in the previous system, but with their new transducer, the environmental noise was decreased even further. The researchers published their results in Physical Review X in tandem with a separate paper on connecting the transducer with superconducting qubits in Nature (a separate article about the Nature paper was written by the University of Colorado Boulder’s Strategic Relations and Communications writer Daniel Strain).

Optical photons oscillateat very high frequencies (hundreds of trillions of cycles per second), and so have higher energy than photons wiggling at microwave frequencies. With this higher energy, optical frequencies yield various benefits to quantum communication because they can work at a wider range of temperatures and at longer distances. In order to harness these benefits, the researchers developed a transducer that could transform microwave frequencies from the superconducting qubit into optical frequencies, or light. The transducer performed this transition using a mechanical membrane that connects the microwave and optical systems together within a cold refrigerator. The transducer thus connected the superconducting circuit to an optical cavity, where photons could bounce around. According to graduate student Maxwell Urmey of the Regal group: “The mechanically vibrating membrane can talk to both the optical cavity [containing the photons] and superconducting circuit, so we're able to transduce from microwave to optical frequencies and back.”

Urmey also explained how the transducer would route information: “You'd want to start with your superconducting quantum computer, and then send a signal from it to the transducer, which would then convert that signal to light. You could then transmit that signal at room temperature, and detect it, ultimately with the capability to generate long-distance entanglement.” The researchers set out to fine-tune the transducer in order to reduce the noise within the context of this setup.

In designing their transducer, the researchers used a special membrane made with a silicon nitride component to better fine tune the robustness of the system. “We designed a phononic crystal structure [designed to control and direct sound waves], which essentially isolates this floppy membrane from the substrate in which it sits,” elaborated Sarang Mittal, a graduate student in the Lehnert group. “That substrate, which is a silicon chip, can also have modes that can couple to your signals. You can isolate the motion of the membrane from the motion of the substrate by designing a series of what looks like blocks and tethers. That improves our quality factor, which is easiest to think about as the number of times an excitation can bounce around in the resonator before it leaves. So, our quality factor in this paper is something like 107. So, if we put some energy into the mechanical element in the membrane, it could bounce around 10 million times before it gets lost.” This improved quality can help improve quantum communications by protecting the system from environmental noise.

By fine-tuning their transducer design, the researchers were able to lower the amount of environmental noise, making the system even more robust. “If you're converting some information between these two frequency domains, you want to make sure you don't add a lot of other random stuff to it,” Mittal said. “That would pollute the signal and ruin what's quantum about it.” As much of the noise in the transducer comes from random extra photons, lowering the number of these photons can lower the noise. As Mittal added, “Many of the improvements we made lowered the noise from 34 additional photons in our last paper to three and a half in this paper.”

The device was so well isolated that the researchers were able to reach the vibrational ground state with laser cooling. This process is analogous to how a laser cools atoms and ions. This ground-state cooling was applied specifically to the mechanical membrane of the transducer, within the phononic crystal design. “In order to ground-state cool the membrane mode, we take advantage of the excellent optical mode control of this device and crank up the laser power,” said Urmey. The researchers found that they could use a higher laser power without introducing more noise to the system. Previous studies had not been able to achieve this result, suggesting that the new transducer design could have big implications for future quantum devices. The team was excited by the abilities of their new transducer, and hope to continue fine-tuning it for even better quality and efficiency. The results of this study push brings the reality of a working quantum network one step closer, highlighting the potential of future technologies that exploit fundamental details of quantum physics.

The process of developing a quantum computer has seen significant progress in the past 20 years. Quantum computers are designed to solve complex problems using the intricacies of quantum mechanics. These computers can also communicate with each other by using entangled photons (photons that have connected quantum states). As a result of this entanglement, quantum communication can provide a more secure form of communication, and has been seen as a promising method for the future of a more private and faster internet.