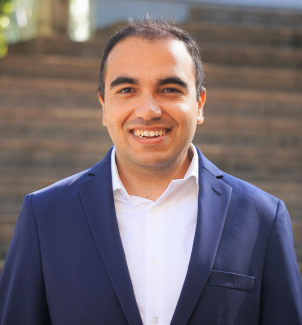 Rabin Paudel, who works at Intel, speaks on his time at JILA

Most, if not all, JILA alumni have found that their time at JILA has impacted their careers. Whether through working on cutting-edge research or networking with others, most JILA alumni have left the institution with essential skills needed for their future successes. This is the case for Dr. Rabin Paudel, who was a Senior Applications Engineer at Cymer/ASML, which is a Dutch multinational company that makes photolithography equipment used by semiconductor chipmakers. Since the writing of this article, Paudel has now started a new position at Intel Corporation.

It was over a decade before this job that Paudel found himself at JILA."I started my graduate program in physics at JILA in 2010," Paudel explained. "I worked in the lab of the late professor JILA Fellow Debbie Jin and got my Ph.D. in 2017. For my graduate thesis, I studied strongly interacting Fermi gases using a novel probing technique with Laguerre-Gaussian optical beams. I also built a new generation of Fermi gas experiments from an empty lab space (which is now part of JILA and NIST Fellow Eric Cornell's strongly interacting Bose gas experiment)." Using the scientific knowledge and research techniques he learned, Paudel transitioned from academia to a career within the technology industry.

While Paudel has recently switched jobs, he still credits JILA with influencing his career success "Even though my current job is not directly in the field of quantum Fermi gases, my time at JILA has profoundly impacted my career," he said. "On the technical side, the ways you learn to design experiments, think about metrology, and approach troubleshooting challenges at JILA have strongly prepared me to work in the semiconductor industry." Paudel has also seen JILA influence his methods of analysis. "On the strategic side, I also learned to think with a holistic approach to any problems, not just specific short-term strategies, and think how things impact a big picture."