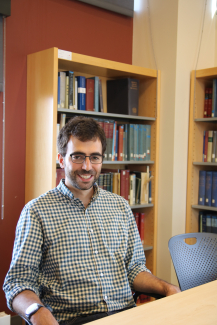 Adam Kaufman — a JILA Fellow, NIST (National Institute of Standards and Technology) Physicist, and University of Colorado Boulder Professor — has been awarded the American Physical Society's (APS) 2023 I.I. Rabi Prize in Atomic, Molecular, and Optical (AMO) physics. “I was surprised when I was notified and feel extremely honored” Kaufman stated. This prize, awarded in odd-numbered years, recognizes influential early-career research in the fields of AMO physics. Along with $10,000 dollars in prize money, recipients receive a certificate citing their contributions. The recipient will receive the prize at a ceremony at the next DAMOP conference in Spring, 2023.  “My group has focused on developing tools to control arrays of alkaline-earth atoms at a single-particle level,” Kaufman said about his work. “We have translated these new tools to quantum science applications in metrology, quantum information, and intersections between the two.” Kaufman’s groundbreaking work using optical tweezers and other tools to study interactions at the quantum level was cited in the prize letter from APS. Several JILA Fellows have been awarded this prize in the past, including Eric Cornell, Deborah Jin, and Jun Ye.

You can find out more about the prize here.