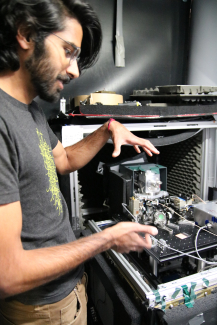 Walk down to the basement labs of JILA and you're sure to find something interesting. From atomic clocks to biophysics, researchers are hard at work advancing scientific and technological frontiers. One of these researchers is graduate student Dhruv Kedar. Kedar works in JILA and NIST Fellow Jun Ye's lab, focusing on laser development for a range of applications including optical atomic clocks and optical timescales. “We're really just trying to make the world's best lasers as part of the atomic clock,” explained Kedar. “We do a good job of isolating out any sort of environmental effects so the atomic frequency of the clock doesn't change but gets more precise.” As optical atomic clocks use a series of lasers to control and measure the quantum state evolution inside an atom, which will redefine the SI unit of Second in the foreseeable future, improving the lasers to be themselves free of environmental noise is an important task.

The atomic clock works by measuring how many times a specific atom oscillates between the ground state and the excited state (which is induced by a laser) at a specific frequency. “To be able to use that frequency, you want to have a laser that is really stable [free from environmental noise],” added Kedar. “If you have a stable laser, it acts like an optical oscillator that can keep time on its own, except that the laser frequency drifts over time.” This drift creates a problem in keeping time, but there is a solution. “What you want to do is take the laser and measure it against the atom, which then tells you the size of frequency excursion, so you can correct it. That kind of feedback cycle gives you the stability of the atom and imprints that on the laser. So, it's nice to have better lasers, because, when you're making these clocks, you essentially don't have to measure the atom as often as would be required for a poorer laser. If the laser is stable enough, we can use its frequency to establish an optical timescale that surpasses its microwave counterparts in the short term and we currently disseminate this signal to several of our colleagues across JILA.”

Atomic clocks are not only a fascinating piece of timekeeping, but as Kedar explained, they also combine both classical and quantum physics. “Generally, people try to make use of quantum resources, meaning they try to use atoms for making clocks rather than physical things like pendulums or quartz oscillators,” he stated. “And here we can do a better job using the quantum properties of these atoms than we can with classical properties. But this laser is actually unusual in that, the best we could do is use a classical material.” This makes Kedar's experimental setup a unique mix of classical and quantum materials. “We're using a resonator cut from a single crystal of silicon, which, there's nothing quantum about that,” he said. “It's inherently designed to be stable and robust against environmental fluctuations that can be of mechanical or thermal origin. And we take the crystal stability and transfer it to the laser. So, it's one of the few experiments in atomic physics where something completely classical currently surpasses what we can do in the quantum realm, at least at relatively short times scales.” The combination of the laser and the atom then allows us to combine the best of both worlds and realize something at the frontier of measurement science.

As a graduate student at JILA, Kedar feeds his lifelong passion for physics through his research. He also enjoys the close-knit feeling of the physics community. “Particularly in atomic physics, the community isn't so big,” Kedar stated. “So, you get to know everybody.” This small community also makes the experiments more intimate for the researchers. As Kedar elaborated: “The experiments are generally very small. You don't have these very large collaborations where you may only see one part of the experiment. There are only a couple of graduate students in each of those experiments. So, you really get to know everything about it, like, it's your experiment. You build it up, you understand everything and having that sense of ownership is really, really nice. As a graduate student, you can feel like you've built something and contributed to something and it's great.” This sense of ownership is reflected across JILA as a whole, from other research groups to JILA's instrument and machine shop, allowing all to take pride in their work. Much of the work conducted in our lab would not be possible without JILA's resources. Many components we place in the cavity's cryogenic environment were designed and constructed in the JILA machine shop, and we detect our cavity signal with some of the worlds best low-noise photodetectors made by members of the electronics staff. The intangible contributions of people like Beth who work to make JILA an inclusive, equitable, and comfortable work environment are incredibly valuable. Everyone here has a hand in enabling the world-class research that occurs in the labs.

While being a part of Ye's lab, Kedar feels honored to work under such a well-known scientist. “Jun is an incredible genius,” Kedar said. “Jun is one of those people you can always go and talk to him if you have an idea. And he will always give you the time of day. He just loves talking about science and has a really infectious enthusiasm.” Kedar highlighted the effort Ye makes to answer all his teams’ questions. “If I send him an email,” Kedar said, “I'll get an email back from him at like two AM, every day like clockwork. He's just so reliable, and it's his love of physics. It can't help but really inspire you to do the same thing and become excited about what you're doing. It just makes everything you're doing really fun.”