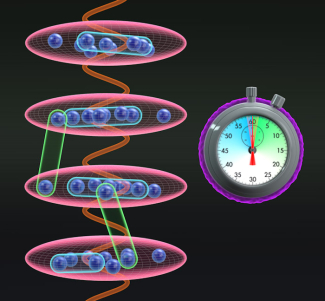 Atomic clocks are essential in building a precise time standard for the world, which is a big focus for researchers at JILA. JILA and NIST Fellow Jun Ye, in particular, has studied atomic clocks for two decades, looking into ways to increase their sensitivity and accuracy. In a new paper published in Science Advances, Ye and his team collaborated with JILA and NIST Fellow Ana Maria Rey and her team to engineer a new design of clock, which demonstrated better theoretical understanding and experimental control of atomic interactions, leading to a breakthrough in the precision achievable in state-of-the-art optical atomic clocks.

To build a better atomic clock, the researchers had to suppress different kinds of systematics, or statistical uncertainties. One was atomic motion. To prevent such types of errors, atoms in clocks are typically trapped in an array of pancake-shape traps made by light (a one-dimensional optical lattice).  Nevertheless, the trapping light itself can also introduce additional errors. Moreover, since atoms inside the traps can bump into each other, these collisions can further generate what are called density shifts, or changes in the clock ticking rate due to the presence of other atoms in the array. Ye, explains “The original JILA strontium 1D lattice clock was oriented vertically, and the trap depth was always sufficiently strong to prevent any tunneling between adjacent sites. This led to two important systematic effects in the traditional 1D optical lattice clocks, the lattice light shift and the atomic density shift. Near the end of 2019, we decided to rebuild the JILA 1D lattice clock and after an extensive systematic evaluation run, we decided to use an intra-vacuum optical cavity to support a very shallow optical lattice oriented vertically.  In such a lattice, the delocalized atomic wavefunctions are described as Wannier-Stark states. An immediate outcome based on the use of shallow optical lattice is the drastic improvement of the atomic coherence, reaching tens of seconds. This was made possible by the reduced light scattering in the lattice, and the reduced atomic density due to the expanded trapping volume.”

Indeed, the new design allowed the group to use the standard tens of thousands of atoms in a 1D optical lattice clock, and along with the improved atomic coherence (where waveforms and frequencies of the atoms aligned), improved the clock measurement precision by nearly two orders of magnitude in the spring of 2021, representing a major jump in clock stability performance.  But, besides precision, the clock must also be free of systematics such as density shifts. These shifts have been one of the most important systematics that the Ye and Rey teams have tried to understand and suppress for years.   According to first author, Alexander Aeppli, a graduate student in Ye’s laboratory, “In these optical clocks, the big thing you want is a lot of atoms,” Aeppli said. “The more atoms you're probing, the more precise your clock is. However, when we pack many atoms into the system, we always have issues that atomic interactions generate frequency shifts in the clock transition, so more atoms can lead to a larger frequency error.”

When the Rey group learned about the performance enhancement on atomic coherence and measurement precision in the new JILA 1D lattice clock involving Wannier-Stark states, graduate student Anjun Chu and Ana Maria Rey immediately started working on theory calculations of the density shift systematics. “A key point is to reduce the atom density so that the atomic interaction strength can be suppressed.” Rey said, “The simplest way to reduce atom density is to lower the trapping lattice depth, however, in a shallow lattice, atoms can tunnel along the lattice which is bad for clock operations. In this new design, gravity can provide an energy penalty to tunneling to other lattice sites, allowing us to use much shallower lattice depths while not being affected by motion.”

Moreover, the theoretical calculations done by Anjun Chu showed that this design can provide even greater opportunities. It happens that at the low temperatures at which the clock operates, quantum mechanics sets the rules on how particles collide with each other. For the case of the strontium atoms used in Ye’s clock, which have fermionic statistics (a type of quantum statistics that applies to identical particles that are non-interacting), the atoms can only feature strong collisions (referred to as s-wave) when they are in a different quantum state, which can happen if atoms are at different lattice sites. On the other hand, atoms in the same site look identical and they only collide weakly via what is referred to as p-wave interactions.

A detailed analysis of the collisions made by Chu revealed that even though the s-wave collisions are typically stronger, they can be made less likely due to the energy penalty imposed by gravity and therefore offer flexible tunability of the relative strength between s-wave and p-wave interactions. “Our calculation is based on the experimental setups in Jun Ye's lab,” Chu said. “The lattice used in the lab was aligned with the direction of gravity. The wave functions of these atoms, which we usually call the Wannier-Stark state, can either be localized in one lattice site in a deeper lattice regime, favoring p-wave interactions, or extended to a few lattice sites in shallow lattice regimes, favoring s-wave interactions. Based on these key properties of the Wannier-Stark states, we can actually tune the interactions of the strontium atoms by tuning the lattice depth.”

In particular, Chu found a specific trapping condition, called the “magic lattice depth”, controlled by the intensity of the laser beams used to trap the atoms, where it is possible to achieve a precise cancellation of the density shifts.  “Our calculations show that the p-wave and s-wave contributions to the density shift are opposite in sign, meaning that when we tune the lattice depth from deep to shallow, at some point in the middle they should cancel each other out,” Chu stated. This lattice depth is about a factor of 6 to 10 times smaller than lattice depths used in previous lattice clocks, and thus had never been experimented with previously. A close collaboration between the experimental and theory groups made it possible to achieve the necessary control to reach the magic trapping conditions predicted by theory and to experimentally observe the desired cancellation of the density shift. This achievement opened exciting opportunities for better clock measurements.

Ye's team was just as thrilled to test Chu's calculations in the laboratory. “When Anjun came to us and told us there's this place where we can eliminate the density shift, that was a really big deal for us last summer when we were trying to measure the gravitational redshift,” Aeppli said. This gravitational redshift refers to a type of frequency shift in atomic clocks predicted by Einstein’s theory of general relativity, which can be used as a metric for precision. The clock measurement precision demonstrated earlier in the shallow lattice had already set the stage to provide measurement of redshift within a single atomic ensemble, as the clock stability was shown to reach 10-20 while the redshift across a 1mm vertical distance would represent a clock shift of 10-19. By operating at the magic lattice depth, however, the system is more stable, because the systematic effect of the density shift is already suppressed. Thus, Ye’s team was able to improve the clock sensitivity to the 10-21 level, allowing them to systematically resolve the gravitational redshift within a millimeter scale sample (as shown in a separate paper published in Nature). As the JILA team is working to make atomic clocks more and more accurate, this new technique would be an important step to make that goal a reality.  “This technique allows you to really push the next level of clock accuracy, as well as the ability to scale up your atom number, which in turn can really reduce your uncertainty. So, it's kind of a win-win: better accuracy, better precision,” Aeppli added.

The cancellation of density shifts described in the paper opens unique opportunities to the whole quantum physics community.  “This paper is a demonstration of precise experimental control and theoretical understanding of atomic interaction in optical lattice clocks to an unprecedented level. It is also a testimony to the power of experiment-theory collaboration, which we have been fortunate to have between the Rey and Ye groups over the past dozen or so years” Ye said. “We are happy to see that the synergy between theory and experiment can lead to breakthroughs both in many-body physics and precision spectroscopy, which in the near-term future might provide insight into the deeper mysteries of our universe.” Rey and Chu both commented. Thanks to the collaboration between a theory group and an experimental group within JILA, a common occurrence in the institution, a significant new method can now be utilized by physicists around the world.

Atomic clocks are essential in building a precise time standard for the world, which is a big focus for researchers at JILA. JILA and NIST Fellow Jun Ye, in particular, has studied atomic clocks for two decades, looking into ways to increase their sensitivity and accuracy. In a new paper published in Science Advances, Ye and his team collaborated with JILA and NIST Fellow Ana Maria Rey and her team to engineer a new design of clock, which demonstrated better theoretical understanding and experimental control of atomic interactions, leading to a breakthrough in the precision achievable in state-of-the-art optical atomic clocks.