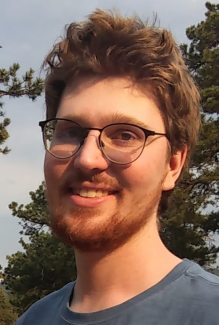 For some physics and math undergraduates, JILA has become a place to learn cutting-edge research while belonging to a community. That's what undergraduate Connor Thomas experienced. Though Thomas is graduating with a bachelor's in biochemistry and transitioning to a graduate program at MIT, he's been grateful for his time at JILA. "JILA has been a pretty fantastic community for me," Thomas said. "In particular, my lab has been great. They were really constant through COVID. I am definitely going to miss all of that."

Thomas joined JILA in the freshman year of his undergraduate career, working under JILA and NIST Fellow Ralph Jimenez. "In that time, I've been working with fluorescent proteins," Thomas explained. "My first work was with directed evolution of red fluorescent proteins, and that was as I was trying to get my feet under me. In my more recent work, I've been studying the blinking of red fluorescent proteins, as these proteins can turn on and off." Thomas’ research helps those who are using a technique called super-resolution, which helps to distinguish different light sources, to better understand protein kinetics. According to Thomas: "Super-resolution requires good estimates of the kinetics of the process. My fundamental role has been to figure out a way to look at a single molecule protein blinking, and extract kinetics from it as data to give as an input for those doing super-resolution." From his research, Thomas was able to co-author several scientific publications as an undergraduate.

Doing research within the Jimenez lab and JILA as a whole has given Thomas some key skills. "I picked up more coding than I ever had before," he said. "That's been generally useful. JILA also taught me to look at projects in the long term, which is definitely a skill. Because, if you know you have time, you can go down rabbit holes and try to find the best solution." Thomas also found that JILA helped him gain valuable connections in the scientific community. "It's always good to learn how the people in your fields talk."