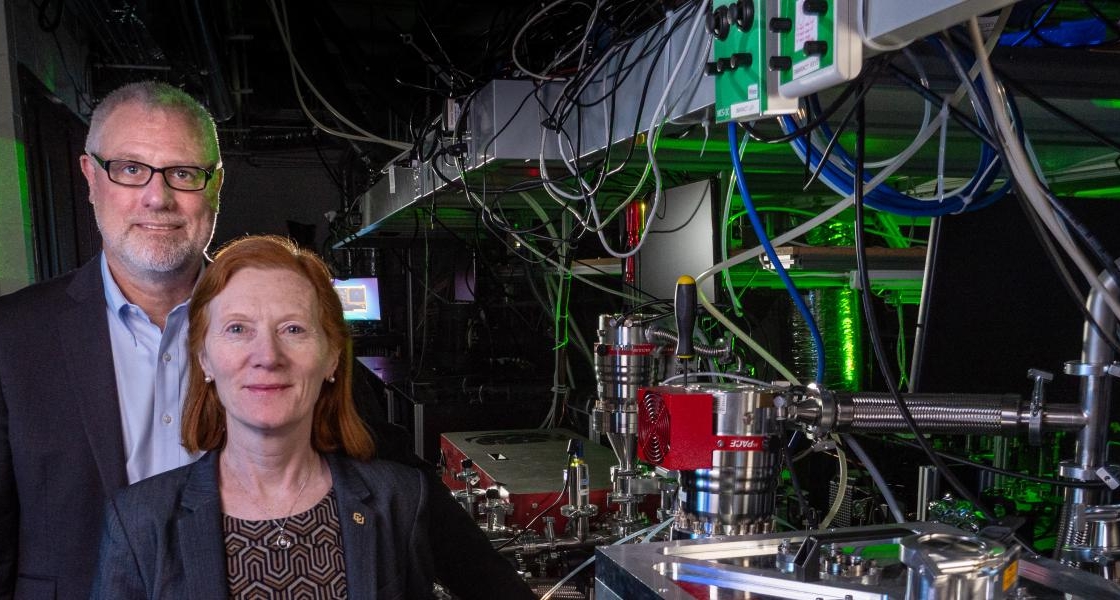 A husband-and-wife team at the forefront of laser science at the University of Colorado Boulder has followed in the footsteps of the Curies, winning a prestigious Benjamin Franklin Medal.

The Franklin Institute announced today that Henry Kapteyn and Margaret Murnane would receive this year’s medal in physics—one of several awards handed out annually by the center named after the scientist and founding father.

Kapteyn and Murnane are fellows at JILA, a joint research institute between CU Boulder and the National Institute for Standards and Technology (NIST). They have pioneered new advancements in X-ray lasers, devices that shoot out incredibly fast pulses of X-ray radiation.

The researchers, also professors in the Department of Physics, are only the third married couple to receive a Benjamin Franklin Medal. The first were Marie and Pierre Curie who took home the prize for chemistry in 1909.

“We are quite excited and humbled to be so recognized by the Franklin Institute,” Kapteyn said. “Margaret and I have been exploring science together for many years now, so it is especially delightful to be following the path of the Curies—a personal inspiration for us—in being recognized by such a longstanding, prestigious organization.”

“Margaret Murnane and Henry Kapteyn are highly-acclaimed, international leaders in laser science,” said John Cumalat, chair of physics at CU Boulder. “The Department of Physics takes great pride in their recognition as 2020 Franklin Institute Award Winners. They are remarkable scientists, professors and mentors of our students.”

When Kapteyn and Murnane first earned their PhDs from the University of California, Berkeley, in the late 1980s, most X-ray lasers could fill a building the size of a warehouse. They wanted to go smaller and less expensive.

The researchers, who joined the CU Boulder faculty in 1999, developed the first “tabletop” X-ray laser in research spanning more than 20 years. They’ve since pushed the field even further. Kapteyn and Murnane’s latest designs can send out busts of light at speeds of roughly a billionth of a billionth of a second—and with more precise control than any other lab has been able to achieve.

The Franklin Institute honored Kapteyn and Murnane for making these devices “accessible to a new generation of researchers and applications in fields ranging from electronics to medicine.”

To do just that, the physicists founded the company KMLabs in the 1990s. For their efforts, they received a Colorado Governor’s Award for High-Impact Research in 2018.

“JILA is excited that Margaret and Henry are again recognized for their decades-long advancement of ultrafast lasers and laser-based X-ray investigation of materials,” said Thomas Perkins, former chair of JILA. “In additional to their scholarly publications, they have educated scores of students and postdocs that continue to push the frontier. Moreover, they founded KMLabs that facilities a broader user base of accessing their advancements and enhance our regional economy.”

Kapteyn and Murnane have also dug deep into what is possible with these new, fast devices.

They explained that their tools allow scientists to view phenomena that were previously too tiny and quick-moving to observe. These lasers can, for example, spy on the energy flowing through ultrathin semiconductors, follow chemical reactions in real time and probe the behavior of animal neurons.

In 2016, the duo helped to launch the Science and Technology Center on Real-Time Functional Imaging (STROBE), a $24 million initiative funded by the National Science Foundation. Among other goals, this partnership with several other universities seeks to develop “the microscopes of tomorrow”. Such devices could one day combine a wide range of imaging approaches into a single device, allowing scientists to observe phenomena that have been beyond their reach to date. Murnane currently directs STROBE, and Kapteyn is its Knowledge Transfer Director.

Kapteyn and Murnane join six other researchers receiving Benjamin Franklin Medals in various fields in 2020. They will officially receive their awards at a gala ceremony in Philadelphia in April.

Both Kapteyn and Murnane are fellows of the American Association for the Advancement of Science, the Optical Society of America, the American Physical Society, and members of the U.S. National Academy of Sciences. Murnane was named a MacArthur “Genius” Fellow in 2000. Originally from Limerick, Ireland, she received the St. Patrick’s Day Science Medal for Academia from the Science Foundation Ireland.