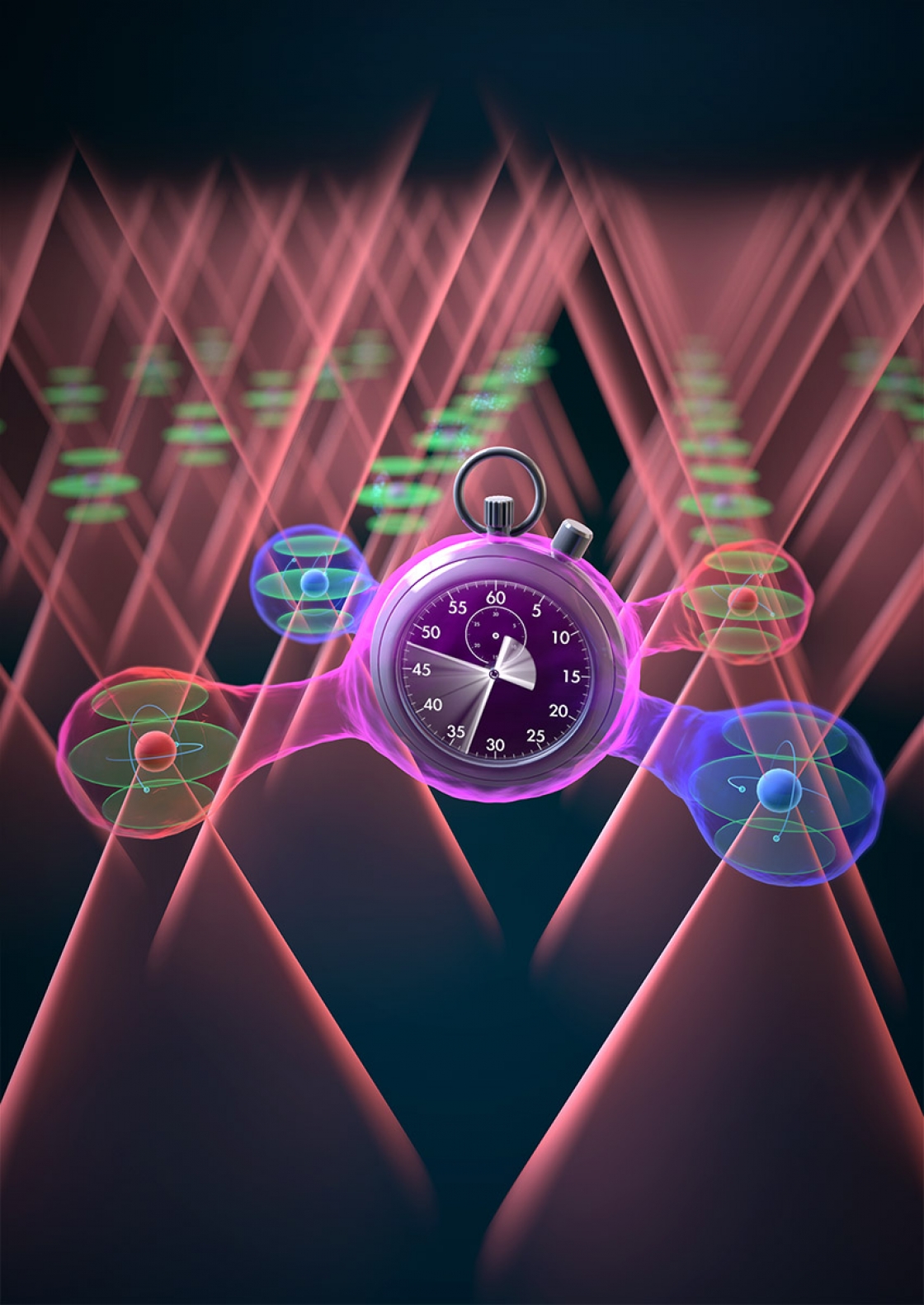 Atoms are tricky to control. They can zip around, or even tunnel out of their containment. In order for new precision measurement tools and quantum devices to work—and work well—scientists need to be able to control and manipulate atoms as precisely as possible.

That’s especially true for optical atomic clocks. In these clocks, a cold, excited atom’s electrons swing back and forth in what’s called a dipole, vibrating like a plucked string. Scientists rapidly count those swings with a laser, dividing a second into quadrillionths of a second.

Scientists are continually exploring ways to increase those coherence times. Using optical tweezers, Aaron Young, along with other members of the Kaufman and Ye groups at JILA, have reached record-setting coherence times of more than half a minute. Their findings were recently published in Nature.

“The trick is to use separate sets of tweezers to prepare and measure the atoms, and to hang on to the atoms while they ring down. This makes it possible to optimize the second set of tweezers to preserve coherence for as long as possible, without having to worry about competing requirements associated with other phases of the experiment,” Young said.

Optical atomic clocks are incredibly varied, but there are two popular means for controlling the atoms: ion traps, and optical lattices for trapping neutral atoms. Each approach has its strengths and weaknesses.

Trapped ion clocks measure the oscillations of a single charged atom, or ion. That atom is pristine, well-characterized, and well-controlled, however, due to the fundamental noise associated with quantum measurements, scientists need to run the trapped ion clock many times to obtain a precise measurement.

Lattice clocks, on the other hand, use standing waves of reflected lasers to form an egg carton-shaped lattice that can hold many atoms. This way, they can interrogate many thousands of atoms in parallel to obtain precise measurements in a short amount of time. But it’s difficult to control any of those thousands of atoms individually, and interactions between these atoms must be well-characterized — a rich and complicated endeavor in its own right.

Controlling and preventing these interactions is where optical tweezers come in. Optical tweezers are highly-focused laser beams capable of grabbing and moving individual atoms—something the Kaufman Group has a lot of experience doing.

“With the tweezers, our traps are more or less independent,” Young said. “It gives you a lot of control over what kind of traps you can make.”

The group uses this extra control to preserve quantum coherence, and minimize many of the effects that can limit clocks.

A hybrid clock of cigar pancakes

Young and the team used lasers to create a vertical lattice of traps, like stacked pancakes. The optical tweezers pierce these pancakes, looking like little cigar-shaped tubes. This creates a two-dimensional array composed of hundreds of spherical traps that each contain a single atom.

This pancake-cigar architecture allows for very quick cooling and trapping of the atoms, at which point they are easily transferred to a second set of tweezers designed specifically for clock physics.

Because the atoms are well-chilled, the second set of tweezers can make very shallow traps for the clock. Shallow traps minimize the number of photons that could interfere with the atoms, and they reduce the power required for the laser, making it possible to make more traps, and trap more atoms. They can also space these traps far enough apart so the atoms cannot move around or crash into their neighbors.

All of this results in record coherence times—48 seconds.

To put that in perspective, if every oscillation took about a full second—like the pendulum on a grandfather clock—you would only have to wind this clock once every few billion years.

“This long lifetime is related to what people call a ‘quality factor’ – it’s the number of times an oscillator swings before it rings down. The quality factor of our experiment is the highest we know of in pretty much any physical system, including, depending on how you compare them, various astronomical systems like spinning neutron stars or planetary orbits,” Young said.

More than a clock

“What we’ve effectively done is put 150 very coherent qubits in the same place, which serves as a really good starting point for engineering interactions,” Young said.

A clock with controllable interactions could be used to engineer quantum states that allow for even more precise measurements of time.

But the Kaufman and Ye Groups see potential to use this technique for another quantum device: quantum computers. With exquisite control of each high-coherence atom, the atoms can act as a qubit for the computer to perform calculations.

Young and Kaufman also see this as a “zeroth order step” in physics research. Physicists are continually seeking better control over atoms to manipulate interactions between them, and study the results—and this hybrid tweezer clock is a promising means of achieving that control for long periods of time. By studying and controlling those interactions, physicists can better understand how the quantum world works, and those discoveries could lead to new advances in quantum-based technologies.

Their study was published in Nature on December 17th, 2020 and was supported by a National Science Foundation Physics Frontier Center grant and a grant from the National Research Council.