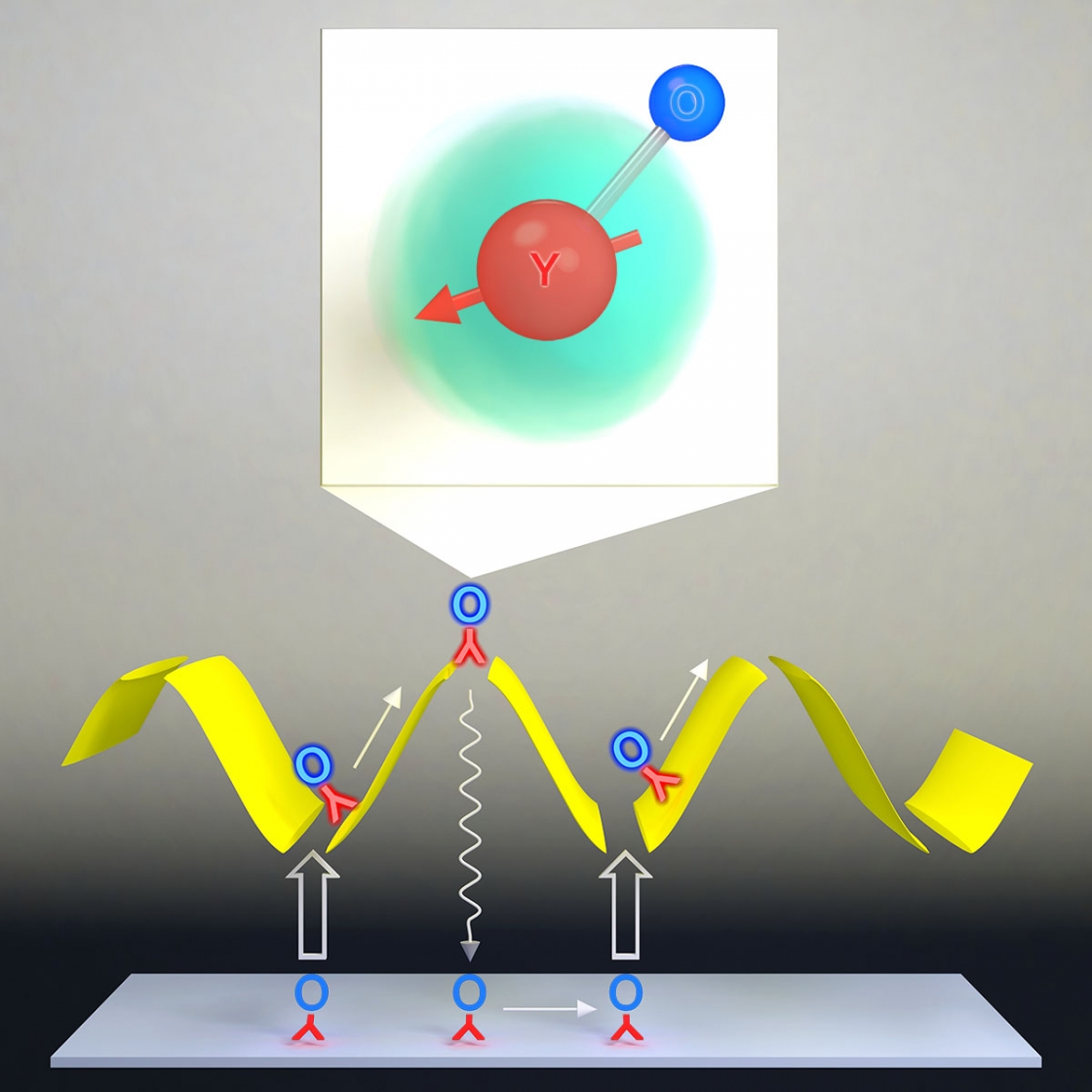 If you want to control the quantum world, it helps to make things really cold—like a few millionths of a degree above absolute zero. When atoms reach those ultracold temperatures, they slow down and scientists can better probe them and study their interactions.

Ultracold atoms have been well-explored for decades, and are the basis for precision metrology tools like atomic clocks. With dense collections of ultracold atoms, physicists have been able to study how atoms interact, leading to new understanding of strange quantum mechanical phenomena.

Yet, atoms are fairly simple—a nucleus with orbiting clouds of electrons. So what could we learn from more complex systems like molecules?

“Molecules have very different properties,” said Shiqian Ding, a postdoctoral researcher in the Ye Lab. Compared to atoms, molecules have more degrees of freedom and richer energy structures, which create opportunities to see new quantum mechanical phenomena, understand how chemistry works on the most fundamental level, and develop new technology platforms for quantum control. However, that complexity also makes it more challenging to extend laser cooling techniques—which work so well with atoms—to molecules.

Techniques exist to bring a pair of cold atoms together to form a molecule, but laser cooling molecules can bring a more diverse set of molecules to ultra-low temperatures. Using a technique called gray molasses cooling, Ding and his team—Yewei Wu, Ian Finneran, Justin Burau, and JILA Fellow Jun Ye—have cooled yttrium monoxide molecules to 4 microKelvin—4 millionths of a degree above absolute zero.

They found that this technique is not only efficient, but also robust, keeping molecules cold even under unusual circumstances, such as in the presence of a very large magnetic field. They also proposed and demonstrated a novel scheme to combine this robustness with a trapping force to increase the molecular density by a factor of 10. Their findings were published in Physical Review X on June 3.

The trouble with molecules

A common and efficient way to cool atoms is using lasers. Electrons in the lower orbit absorb a photon from the laser and go to a higher orbit. The electrons then come back to the same ground orbit by emitting another photon. Both of these processes cause the atoms to recoil. Repeating these processes hundreds of thousands of times removes most of the kinetic energy of the atoms, i.e., cools them down.

That’s harder to do with a molecule, Ding explained. In a molecule, electrons orbit around more than one nuclei. When an electron drops back to the ground state by emitting a photon, the recoil also affects the motion between the nuclei in the molecule, causing them to vibrate, rotate, or both. A separate laser is required to address each vibration/rotation state in order to continuously scatter photons. Usually, you might need tens or even more lasers, each tuned to exactly the right frequency for each possible state, he pointed out. This is obviously not realistic.

A few molecules are an exception to this picture, like yttrium monoxide. In yttrium monoxide, only one electron is active and it orbits mostly around the yttrium nucleus, and barely interacts with the oxygen nucleus. When this electron falls back to the lower orbit, it hardly excites the relative nuclei motion. In this case, much fewer quantum states get involved and only a few lasers are required to cycle hundreds of thousands of photon-scattering events to perform laser cooling.

Ding and his fellow researchers tried a well-established technique called gray molasses cooling on the molecule—with some surprising results.

“Because molecules like to turn dark with photon scattering, finding a cooling technique that works by using dark states can be a natural way forward. We found this technique to be exceptionally efficient and robust for cooling yttrium monoxide molecules.” Ding said.

Up and down the hill

To understand how gray molasses cooling works, it helps to think of the Greek myth of Sisyphus, who was forced to eternally push a boulder up a hill, only for it to fall back down.

Ding and his team create many artificial hills with interference of laser light for yttrium monoxide molecules to climb. Once the molecule reaches the hilltop, the lasers transfer it back to the bottom, where the molecule is in what is known as a dark state, Ding explained. In the dark state, if the molecule is not moving, it will not “talk” to the lasers anymore, i.e., it does not feel the existence of the hills the lasers create.

But if the molecule starts moving, the hills show up! Just like the mythical Sisyphus, the process keeps repeating itself and the molecule loses energy on the way. As it loses energy, it gets colder.

The yttrium monoxide reached 4 microKelvin—that’s 4 millionths of a degree above absolute zero. It’s the coldest temperatures physicists have reached for laser-cooled molecules, Ding pointed out.

What makes this cooling technique even more appealing is its exceptional robustness for cooling yttrium monoxide. If the laser was a little out of tune, it still worked. Even when the molecules were surrounded by a large magnetic field, they kept cold.

“That's striking. We are talking about 20, 25 Gauss [of magnetic field],” he said. With other systems, even 1 Gauss can seriously hurt the cooling effect, he explained. But for an yttrium monoxide molecule, the active electron is mostly orbiting around the yttrium nucleus, and the magnetic field sensitivity of the electron is largely mitigated by its coupling to the yttrium nucleus.

“Because of the special structure of yttrium monoxide, the cooling is just not sensitive to the magnetic field,” Ding added.

This robustness is ideal to get the ultracold molecules into a trap to study them. Think of a kid on a swing. If the kid has more energy, she can reach higher and further; if she has less energy, she will settle closer to the bottom. Similarly, with robust cooling, colder molecules tend to gather at the bottom of a trap, leading to a higher molecular density.

Ding and his team managed to employ the cooling robustness against the magnetic field to compress the molecular cloud. The trick is to apply a magnetic gradient to attract the molecules towards the trap center and at the same time cool them down with the gray molasses cooling technique. This way, as the molecular cloud is compressed, they remain cold.

“We can increase the density by a factor of 10 using this technique…Now our molecules are very cold, but the density is not high enough yet to see all these quantum properties. That's our next goal.” Ding said.

One possible way to increase the density further is to load the molecules into an optical dipole trap. This trap normally perturbs the structure of molecules, resulting in an elevated temperature. But the cooling robustness of yttrium monoxide might be able to hold the molecules cold in the trap, and, as a result, produce a higher density. Once they are tightly packed in the trap, the molecules will be able to interact—and that’s when scientists can see the interesting quantum mechanical properties. Using these cold, trapped molecules, physicists may also be able to study chemical processes that have mostly been studied in theory.

You can read the full study in PRX. This research was supported by the National Science Foundation’s Physics Frontier Center grant, NIST, and a postdoctoral fellowship from the National Research Council.