An optical lattice experiment learned to be an interferometer through shaking 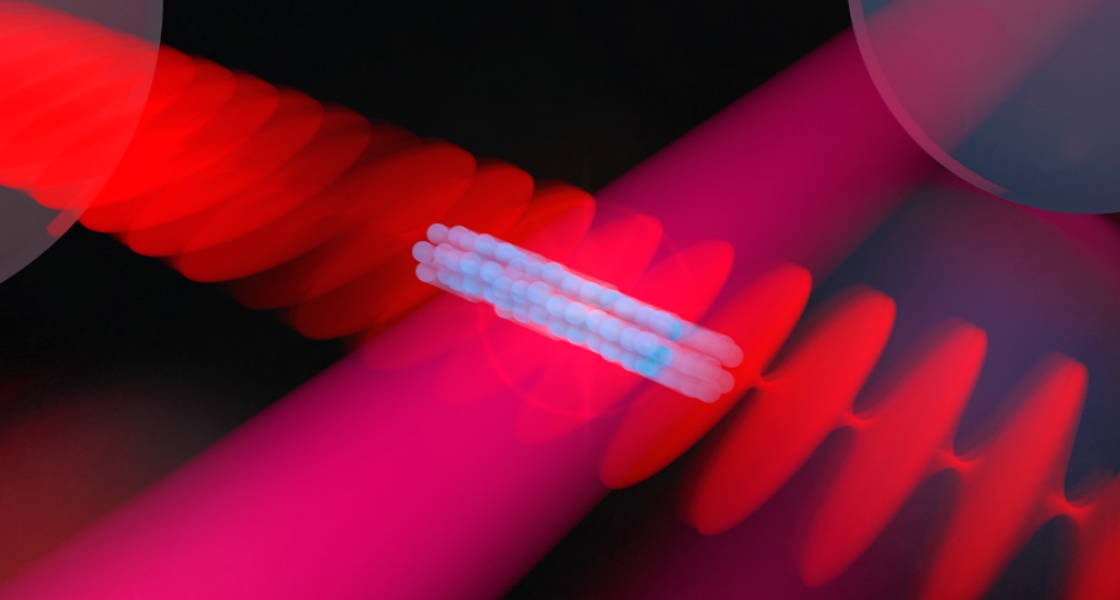 Tens of thousands ultracold atoms (blue) sit within an optical lattice (red) like eggs in a laser carton. By shaking the optical lattice back and forth, the Anderson Group at JILA was able to split the atoms (half moved left, half moved right) and then recombine them, thus interfering their momentum. This interferometer is capable of measuring both magnitude and direction of applied forces.  Photo Credit: Anderson Group and Steven Burrows / JILA

That was recent JILA graduate Carrie Weidner’s first thought when her advisor, JILA Fellow Dana Anderson, proposed the difficult experiment: to build an interferometer unlike any before – an interferometer of shaking atoms. But the grit paid off, as this compact and robust interferometer outperforms all others in filtering and distinguishing signal direction.

While the designs of most atom interferometers are symmetric and elegant, Weidner says the shaken-lattice experiment proposed by Anderson “is more like broken eggs.”

Weidner’s experiment begins with an optical lattice, which is a field of laser wells that looks similar to an egg carton. Into this laser egg carton Weidner drops tens of thousands ultracold atoms. But rather than placing one atom per well, as one does with eggs, Weidner says the atoms exist in multiple wells at the same time, as if they were leaky, broken eggs.

But the leakage is intentional, says Weidner. This leakage allows the momentum, rather than the position, of the atoms to be well defined and quantized. And this is what sets Weidner’s interferometer apart from others.

From this interference, Weidner can measure forces, or accelerations, applied to the system. And the longer the time between when the atoms split and recombine, the more sensitive this measurement. While Weidner has thus far only measured small forces that she purposefully applied, she predicts her experiment could be sensitive enough to measure seismological changes in the Earth. She even jokes that her experiment could one day sense a student skateboarding outside.

And this interferometer can measure not only the magnitude of accelerations, but the directionality, too. This is a difficult task for most interferometers due to their symmetry; however, the asymmetry inherent in the shaken lattice (originating from the first shake moving either left or right) lends itself for this use, says Weidner.

But this novel take on a century-old tool was not easily developed. Weidner can still recall the moment her advisor, Dana Anderson, proposed the idea. Skeptical at first, Weidner set out to simulate the experiment before building.

It was clear what the experiment needed to do: shake an optical lattice such that half of the atoms move in one direction (at a very specific speed), and half the atoms move in the opposite direction (at the same, very specific speed). But how the lattice should shake – fast, slow, or to the beat of cha-cha-cha ­– was not easily solvable, said Weidner. Instead, Weidner decided to have the experiment teach itself how to shake.

“I taught the experiment to run itself,” said Weidner. Specifically, she created a learning algorithm that would change shaking behavior based on experimental results. This learning algorithm eventually learned how to split the atoms apart and bring them back together.

“We would run the experiment with some random shaking function, and we would get a result… then the learning algorithm would look at it and be like, ‘that’s not what I want, try this shaking function’,” said Weidner. “I almost coded myself out of a job, but I still had to lock the lasers,” she joked.

Basing the interferometer on learning algorithms not only sped the research along, it also allows the experiment to be optimized for particular signals. This feature makes the experiment robust and portable, as the experiment could potentially filter forces in a noisy environment, such as on a bumpy airplane.

“My advice to any graduate student is, ‘teach your experiment how to run itself.’”