Atoms could live in their excited states forever by reaching a dark state. 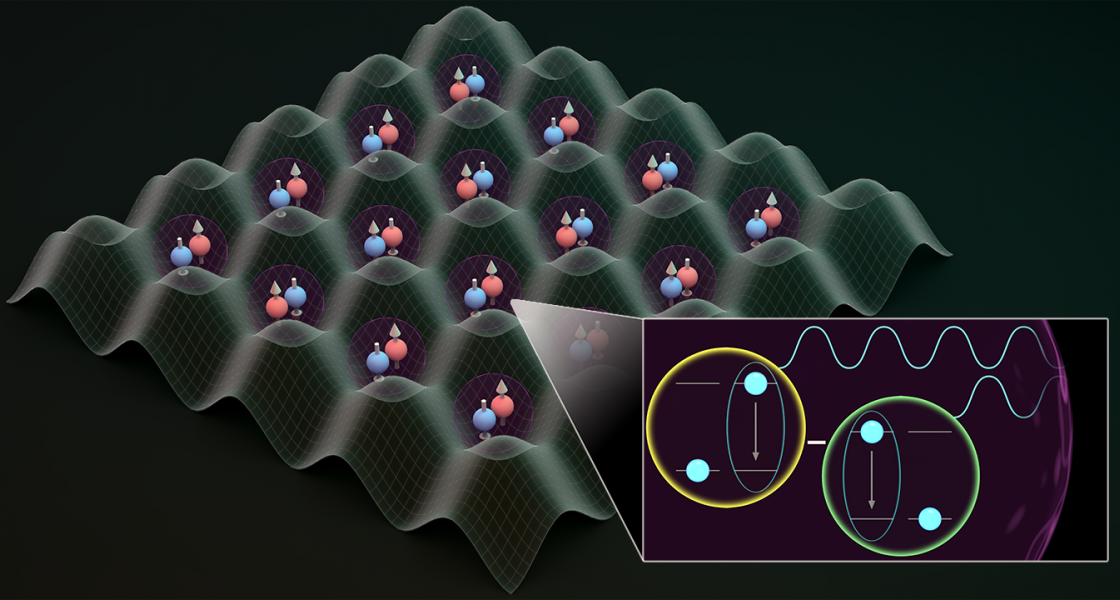 The Pauli exclusion principle dictates that no atoms with the same quantum number cannot share the same space. By preparing and pairing up atoms, Asier Piñeiro Orioli in the Rey Theory Group has devised a way to use this principle so that atoms will stay in their high energy state. Image Credit: Rey Theory Group/Steven Burrows

"Dark states are stable and they do not decay. There is the possibility that they live forever." -Ana Maria Rey

How long can a unique atomic state live?

Atoms normally live in their ground state, where its electrons are sitting in their lowest possible orbits. But when the atoms are hit with some extra energy, their electrons are kicked into a higher energy level, orbiting further from the nucleus of the atom. That’s an excited state.

Nevertheless, a single atom does not remain excited forever. How long that excited state will last depends on the species of atom, but eventually the atom shoots out the excess energy via a burst of light or collision with another atom or surface. Then the electrons decay back to their ground state.

And reaching a very long-lived state is tricky. Very long-lived states are hard to excite and typically require very sophisticated laser technologies to hold atoms in vacuum. Ideally, scientists would like to work with states that are both easily excitable and live for a long time.

Quantum mechanics offers hope that atoms could live longer in an excited state—the creation of a dark state. “Dark states are stable and they do not decay,” said JILA Fellow Ana Maria Rey. “And there is a possibility that they live forever…this idea has caught a lot of attention in physics.”

After playing around with some material, Asier Piñeiro, a research associate in the Rey Theory Group at JILA, found a way to harness the power of the dark state.

A dark state requires symmetry, Rey said—a balance between two atoms. In an optical atomic clock, strontium 87 atoms are held in an egg-carton-like lattice, one atom per well. So, the first step to create a dark state is to add a second atom to each well. Reaching that desired balance within atom systems relies on the Pauli exclusion principle and destructive interference. The Pauli exclusion principle says that no two identical fermions can have the same quantum number.

Destructive interference means that the two emitted photons would see each other and cancel out their own radiation, said Piñeiro. “In a sense, it's like the photons cannot escape. It's like two prisoners bound together and going in opposite directions,” he explained.

The term dark state is literal; the atoms can’t absorb or emit light as photons. And that is powerful. However, atoms need more than two energy levels for destructive interference to happen. In strontium 87 atoms, the ground and excited states have substructure and contain at the least 10 different internal levels, giving the photons more ways to maneuver and cancel each other.

Atoms can be very stubborn. In a dark state, they can remain in an excited state for a relatively long period of time, but getting the atoms into that state is tricky.

Rather than struggling to push these atoms directly into the right energy levels, Piñeiro proposes moving the atoms up in two separate steps to prepare a dark state. Adding this intermediate step will let the experimentalists tame the stubborn atoms and force them into a dark state.

While the Ye Group’s optical atomic clock is one of the best in the world, long-lived atoms would offer opportunities to explore new ideas. Rey and Ye have been looking at using the Pauli blockade to prolong the life of strontium’s other excited states when Piñeiro found a way to achieve completely dark states.

“I wasn't looking for it. I was just playing around a bit with some very easy program that I wrote to understand how these atoms behave. And then suddenly I saw something that was not decaying,” Piñeiro said.

The other beauty of this proposal? The geometric arrangement of the atoms doesn’t matter, Rey said. As long as there are two atoms per site, it doesn’t matter the shape or pattern of the optical egg carton.

If Piñeiro’s proposal works, the Ye Group could eventually build a clock that runs forever. A longer lasting clock would open up new experiments that will let us understand quantum mechanics and the world around us.

This study was published in Physical Review Letters on November 26, 2019.