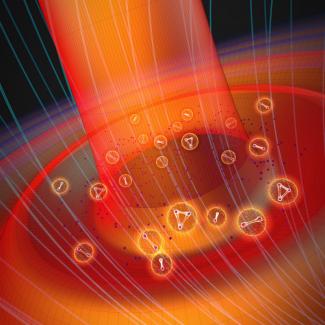 By quickly lowering the magnetic field in a Bose-Einstein condensate, Catherine Klauss and her colleagues in the Jin-Cornell group made a lot of two-atom molecules of rubidium (85Rb2). They also directly observed and identified––for the first time ever in an ultracold gas––about 8% of their molecules as Efimov molecules made of three rubidium atoms (85Rb3). Credit: The Jin and Cornell group and Steve Burrows, JILA

Newly minted JILA Ph.D. Catherine Klauss and her colleagues in the Jin and Cornell group decided to see what would happen to a Bose-Einstein condensate of Rubidium-85 (85Rb) atoms if they suddenly threw the whole experiment wildly out of equilibrium by quickly lowering the magnetic field through a Feshbach resonance.1 Theoretically, this maneuver is predicted to make the atoms infinitely attracted to each other, and at the same time, infinitely repulsed by each other.

“This is a really crazy regime, and things happened really fast,” explained Klauss. “At this resonance, the energy of the atom pairs equaled the energy of molecules, and the interactions were going on like crazy.”

At first, Klauss and her colleagues thought they were losing most of the atoms in the experiment. However, they soon discovered the atoms were actually still there even though the researchers couldn’t see them any longer. The atoms had been transformed into molecules, which had to be probed differently.

Once the researchers realized they’d made molecules, they decided to study them. First, they held the molecules at a specific magnetic field and watched them decay away by turning back into atoms. But, no matter how many times they repeated the experiment, there was always a two-component decay: a fast one and a slower one. The slower decay varied with the density of the initial atom sample, which was expected for a two-atom molecule, or dimer (85Rb2).

But the initial decay was happening much too fast to involve dimers. After consulting with JILA theorist José D’Incao, Klauss and her colleagues concluded they were making three-atom molecules, or trimers. And, the trimers were almost certainly the Efimov molecules (85Rb3) that have been studied theoretically for nearly 50 years, including work by D’Incao over the past decade. In this experiment, about 8% of the ultracold 85Rb atoms in the original BEC formed the exotic Efimov molecules.

“This is the first direct observation of Efimov molecules in an ultracold gas that we’ve already positively identified,” Klauss said. “You can tell these molecules apart from dimers because the Efimov trimers die faster. José’s theory predicted that Efimov trimers would have a lifetime of about 100 microseconds (10-4 s), and that’s exactly what we see in the lab.”

1Near a Feshbach resonance, small changes in the magnetic field have dramatic effects on the interactions of atoms in an ultracold gas.