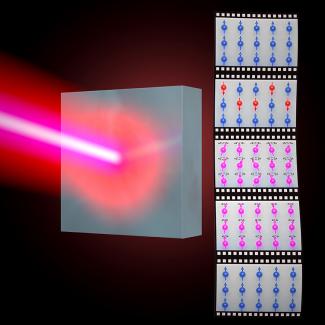 If the electrons in a ferromagnet are heated above the Curie temperature by a femtosecond laser, the spins also become excited. This heating process creates a previously unobserved super-excited magnetic state within 20 fs.  Excess energy acquired during the heating process gets deposited into the spin system (2nd frame). The spin alignment later randomizes, within ~ 200 fs (3rd frame). Photo Credit: Kapteyn-Murnane Group and Steven Burrows / JILA.

Magnets hold cards to your fridge, and store data in your computer. They can power speakers, and produce detailed medical images. And yet, despite millennia of use, and centuries of study, magnetism is still far from fully understood.

Members of the Kapteyn-Murnane group at JILA recently discovered that the underlying cause of magnetism – the quantum spin of the electron – can be manipulated 10 times faster than previously thought possible. And while this result may be very useful in practice, the causes are not yet understood.

Magnetism, while complicated in detail, has simple origins: it arises from electric charges moving in a circle. Creating a weak magnet is as simple as looping a current-carrying wire. And the magnetism intrinsic to materials, like that in your fridge magnet, also arises from circulating charges, albeit very small ones.

Every electron has a quantum property, called spin, that generates a tiny magnet. Quantum law dictates that no two electrons can have the same spin alignment while in the same location. This law encourages nearby spins in most materials to pair in opposite alignment –­ one spin is up, the other spin, down. These pairings cancel out the electrons’ magnetism, and are the reason why most materials are not magnetic. But in the strongest of magnetic materials, the spins of all the electrons align in the same direction, resulting in a net magnetic field.

These strong magnetic materials, officially called ferromagnets, are often called “permanent magnets” due to their ability to retain magnetism. A ferromagnet can lose its magnetism, however, if the electron spins are randomized. The spins of a ferromagnet will transition from aligned to randomized if heated. The temperature at which the spins transition, and the magnetism melts away, is called the Curie temperature.

While ferromagnets can be heated through conductive (e.g., hot plate) or convective (e.g., oven) means, it is also possible to heat them with radiation (e.g., laser pulse). And with the evolution of rapid, femtosecond (1 fs = 10-15 seconds) laser pulses, the timescale on which ferromagnets can be demagnetized is decreasing rapidly. So rapid, in fact, that laser demagnetization is now relevant to fast, energy-efficient electronics and data storage.

But understanding exactly how fast magnetism can melt away is complicated. Because electrons are very small, very fast, and interact on very short (fs) timescales, we simply did not have tools capable of capturing the fast melt of spin alignment– at least until very recently.

A team of students and scientists at JILA made a series of surprising discoveries using femtosecond bursts of visible and X-ray laser light. Most recently, they showed that the electron-spin system in a laser-heated ferromagnet can be driven into a previously unknown super-excited state, where the spins of some of the electrons flip to opposite alignment. This can happen on timescales 10 times faster than previously realized, within a fleeting 20 fs.

Several spins flipping to opposite alignment is not the same as the spins randomizing, a process which the team observed later, at about 200 fs.

These new observations of how magnetism melts away can be compared to the much slower process of heating ice water. If we add heat to a mixture of ice and water, the temperature of the water does not initially rise above the freezing point (0˚C), because the heat energy must first melt the ice. Similarly, in a laser-heated magnet near the Curie temperature, the spin alignment does not immediately randomize because the laser energy must first flip individual spins.

Specifically, research by graduate students Phoebe Tengdin and Wenjing You, in collaboration with Postdoctoral Researchers Dr. Zhensheng Tao and Dr. Xun Shi, all in the Kapteyn-Murnane group at JILA, indicates that there is an as-yet not understood spin state in ferromagnetic systems that can soak up energy on 20 fs timescales. This finding also demonstrates that spins can be manipulated 10 times faster than previously thought.

This work was published in Science Advances on 2 March 2018.