Researchers at JILA unraveled the multistep process behind the formation of atmospheric carbon dioxide. 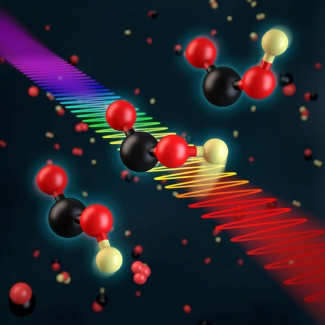 The DOCO molecule interconverts between isomers trans-DOCO (left) and cis-DOCO (right) through rotation of the single bond (center). The multiple colors of the frequency comb enabled Bui et. al to not just identify cis-DOCO, but all of the molecules in the reaction simultaneously. Photo credit: Ye Group and Steven Burrows, JILA.

The reaction, at first glance, seems simple. Combustion engines, such as those in your car, form carbon monoxide (CO). Sunlight converts atmospheric water into a highly reactive hydroxyl radical (OH). And when CO and OH meet, one byproduct is carbon dioxide (CO2) ­– a main contributor to air pollution and climate change.

But it’s more complicated than that. Before CO2 is formed, a short-lived, intermediate molecule, called the hydrocarboxyl radical (HOCO), is formed. The existence of HOCO was first proposed over 40 years ago, but the unstable nature of the molecule made it difficult, nearly impossible, to observe. The Ye group of JILA, however, has been closing in on the impossible.

The deuterated version of HOCO, called DOCO, was observed by Bryce J. Bjork, Thinh Q. Bui, Jun Ye, and their collaborators in 2016. Deuteration, or substituting a heavier version of the hydrogen atom, called deuterium, reduced signal contamination from the atmospheric water in their system.

Yet their understanding of the reaction was incomplete. The version of DOCO that the Ye group observed did not dissociate into carbon dioxide. “There were a lot of missing details in the reaction pathway” said Thinh Bui, a postdoctoral researcher in the Ye group.

In their new paper, published in Science Advances, every step of the reaction, starting from the reactants, OD and CO, all the way to the final product of CO2, and every intermediate in between, is finally accounted for.

Cis-DOCO is the more elusive of the two isomers because it is more energetic. Like a child running around, the high energy cis-DOCO rotates, vibrates, and generally evades detection. Remove this high energy with a molecular collision and the cis-DOCO calms down. Let cis-DOCO run around however, and something more interesting happens: cis-DOCO will dissociate into deuterium and CO2, a trick that the calmer trans-DOCO cannot do.

The original work by the Ye group identified only the trans-DOCO variation. To identify cis-DOCO, the group had to wade through heaps of overlapping molecule signals.

“We didn’t know where the cis-DOCO signal would appear, and we didn’t know what it would look like,” said Bui. “When you are searching for something exciting that no one has ever seen before, you wish to have a tool that simplifies the problem.”

The tool that Bui alludes to is the frequency comb. “It’s rising fairly fast to be a rock star in the spectroscopy world” said Bui.

Bui describes the frequency comb as a million lasers in one. Whereas a standard (continuous wave) laser is a single color, a frequency comb can have up to a million colors. Unlike white light, the colors in a frequency comb are not continuous, but discretely, and precisely, spaced. The result is a tool that is both broad yet fine, like a net meant for catching (sight of) molecules.

The frequency comb not only enabled Bui et. al to identify cis-DOCO, but simultaneously observe all the molecules in the reaction in real-time. Through this simultaneous observation, Bui et. al discovered that the cis- and trans- populations were interconverting, i.e., the molecule was rotating between either orientation, on a rapid microsecond timescale.

Now that all the molecules present during the formation of carbon dioxide are accounted for, the Ye group can begin exploring how to control this reaction. If the Ye group can find a way to stop the interconversion between cis- and trans-DOCO, (possibly by operating at lower temperatures), the group may be able to control the reaction pathway, thereby decreasing or increasing the production of CO2.

This work was done by JILAns Thinh Q. Bui, Bryce J. Bjork, and Bryan P. Changala, from the group of JILA Fellow Jun Ye. The group worked with T.L. Nguyen and J.F. Stanton from the University of Florida, as well as M. Okumura from the California Institute of Technology. The work was published in Science Advances on 12 January 2018.

This research was supported by the Air Force Office of Scientific Research, the Defense Advanced Research Projects Agency (Spectral Combs from UV to THz), the National Institute of Standards and Technology, and the National Science Foundation’s JILA Physics Frontier Center.