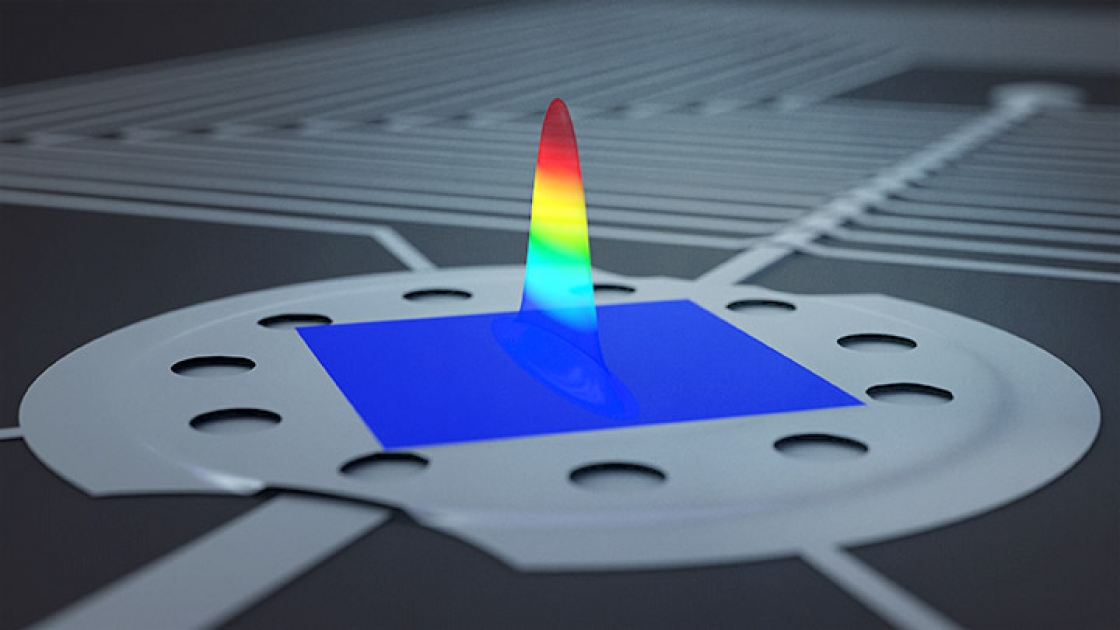 The Lehnert Lab has been able to measure the movement of a quantum drum so precisely that the Heisenberg uncertainty principle is on full display. Image Credit: Lehnert Lab/Steven Burrows

“It's not noiseless but in principle it could be noiseless, and in practice it's approaching that limit.” - Robert Delaney

At JILA, scientists work on mechanical oscillators which are the size of a grain of salt. They may be tiny, but they are the heartbeat of quantum technology, and are currently a promising technology for networking quantum computers.

“If you push on a mechanical oscillator, it's going to move,” said Robert Delaney, a graduate student in the Lehnert Lab. The oscillator vibrates like a tiny drum. As it moves it translates information from one signal to another, a crucial task for devices from cell phones to computers.

“You'd take information from the microwave domain, convert it to motion, and then convert it to the optical domain,” Delaney said.

And in principle these mechanical oscillators could do that almost perfectly, he added, if it weren’t for noise. Not all noise can be picked up by your ears. In physics, any unwanted fluctuation in the medium around your equipment is noise. Noise can come from a lot of sources: heat, other electric signals. Miniscule fluctuations called zero-point fluctuations are present even in the vacuum of space. Just measuring the movement of the drum creates noise. No matter where it’s coming from, noise can distort the signals to and from the oscillator.

Now the Lehnert Lab at JILA has found a way to quiet that noise around their measurements. And it turns out when you do that, you get more than a quieter drum. This method also beautifully illustrated one of the most famous tenets of quantum mechanics—the Heisenberg uncertainty principle.

Squeezing out the noise

No system will ever be perfectly noiseless, but JILA Fellows Cindy Regal and Konrad Lehnert have made great progress reducing the noise around these mechanical oscillators. In order to use these oscillators in larger applications, they need to be prepared in precise state, and that involves measuring it.

But that’s where they were hitting a snag. Measurements in a quantum system can be tricky. A grain-of-salt size drum seems tiny, but that’s a large object to measure in the quantum world. And this is where Heisenberg comes in. The Heisenberg uncertainty principle says you can either perfectly know an object’s position or its momentum at any given point in time, but never both. According to this fundamental principle of quantum mechanics, a simultaneous measurement of both the position and momentum of the drum adds a lot of noise relative to that of fragile quantum signals.

However, measuring either the position or the momentum on its own can—at least in principle—be done perfectly, without any added noise. Other techniques for measuring the motion of a mechanical oscillator have mainly focused on continuously monitoring its position. But most of these techniques have had other sources which added noise, or made the mechanical oscillator’s motion unstable, preventing efficient measurement of the quantum state of motion.

Delaney and his team decided to create that instability in a way they could control. And to do that, they used microwaves to squeeze the oscillator.

“If those zero-point fluctuations were like a blob in phase space, you might stretch out that blob so that the area's the same, but it's very long in the momentum axis and very short in the position axis. That’s squeezing,” Delaney said.

Then, rather than measuring continuously, Delaney and his team used short, pulsed measurements to amplify the drum’s motion and measure it at a single instant in time. This technique turned out to be really quiet, reducing the noise by a factor of six over other methods.

“It's not noiseless but in principle it could be noiseless, and in practice it's approaching that limit,” Delaney added.

Not only is the measurement quiet, you can understand the quantum motion of the mechanical oscillator so precisely that the Heisenberg uncertainty principle is on full display. Using this method, Delaney found that they were able to tell the drum’s position or its momentum with great precision.

The beating heart of quantum technology

Mechanical oscillators are already at the heart of modern technology. Cell phones, for example, use a mechanical oscillator to turn the vibrations from your voice into an electrical signal, which is then converted to radio waves and sent flying through the air to your friend’s phone on the other end.

Quantum computers and quantum networks will need to do the same thing to send information, and these tiny drums will help them do it. Making them quieter will help those signals travel loud and clear.

Beyond its application for new technologies, seeing the Heisenberg uncertainty principle demonstrated so perfectly is its own reward, Delaney said.

“That's really what I found appealing about it,” he said. “I really like fundamental physics, but it's also nice to have it have some connection to something that may be a reality in the future.”

This study was published in Physical Review Letters on October 30, 2019.