A proposed experiment would study rapid scrambling in the lab 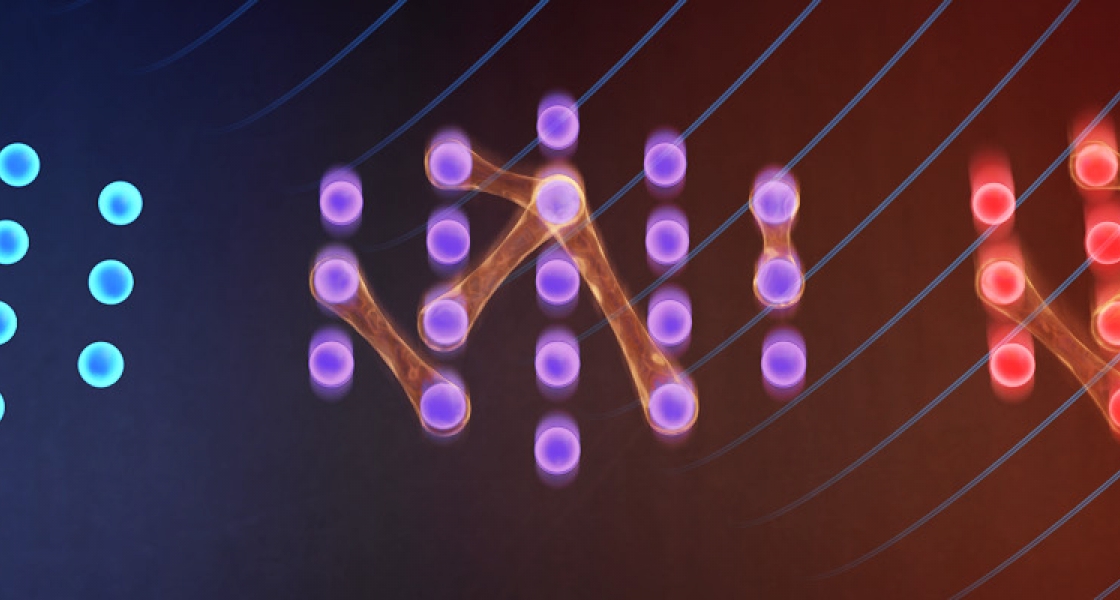 When a particle crosses the event horizon of a black hole, the quantum information of the particle is quickly scrambled and entangled. Image Credit: JILA/Steven Burrows

"You are going to deviate exponentially from where you started…

Black holes still pose a lot of questions for physicists, especially when it comes to understanding what happens to the dust, particles and light they draw in. Nothing that crosses a black hole’s event horizon can escape. When particles fall in, we can’t read their information anymore and they appear to be lost. But the laws of physics tell us that information can’t be truly lost. So what’s happened to it?

This whole process of scrambling is also tied to the idea of chaos, which is often called “the butterfly effect.” With chaos, any small change can exponentially ripple throughout the system. If a butterfly flaps its wings in the Amazon, it may set off a tornado in Oklahoma.

In short, the information is still there, but it’s all mixed up. When we try to read a small part of the system’s information, we cut the entangled connections between those particles, and the information seems to disappear. So we can’t read it with simple measurements, Rey said. If we could, physicists could know what the original state of the particle or system was.

Physicists can’t take a field trip to a black hole to test things like rapid information scrambling or entanglement. But we may be a step closer to being able to test these ideas in a lab. JILA theorists published a proposal to build, particle by particle, a microscopic system that acts like black hole and scrambles quantum information rapidly.

Driving through the scramble

To understand how to tackle this challenge, think of driving a car along a smooth road, Rey said. If you drive forward, stop and back up, you would end up in the same place. No information would be lost. If you turn the wheel of the car and back up, the car’s position will change in a neat, linear fashion when you back up.

“We don’t have a black hole in the lab, but we are trying to emulate this scrambling of quantum information,” Rey said. And then there’s chaos.

If the car is no longer on a nice, smooth road, but a bumpy field full of rocks and trees, your position will change drastically when you turn the wheel and back up. “Then you’re going to bump into many things, and then you are going to deviate exponentially from where you started,” Rey said. “This is a little bit like chaos.”

Making a black hole(ish) in the lab

Most models of fast scrambling are too complex to be implemented in the lab. And solving the scrambling is extremely complicated, even with the most powerful computers. So the team had to think simple. Dr. Robert Lewis-Swan, a JILA postdoc and first author on a recent paper describing the team’s ideas, said they can create this “black hole-ish” system using the Dicke Model, a simple model proposed by Robert Dicke in 1954.

“The Dicke model is known to feature chaotic behavior and is relatively easy to experimentally realize,” he said.

The scientists in Dr. John Bollinger's lab at NIST use lasers to drive vibrations in a crystal made of trapped ions, like tapping the head of a drum. At the same time, they use microwaves to continuously flip the orientation of the quantum spin of the ions. Together, this realizes the Dicke model in the laboratory, allowing the scientists to generate chaos and scrambling of information in a matter of milliseconds.

To observe how information scrambles and the system becomes entangled, they hit the system with another laser to perturb the vibrations of the crystal. Then, by tuning the lasers and microwaves the experiment is put into reverse gear. By comparing how much the system is different to the state it started in, the scientists can characterize how information has been scrambled: a measurement they call a Fidelity Out-of-Time-Correlator or FOTOC.

This experiment will help scientists better understand the rich and complex physics of black holes. But it will also tell us more about how chaos, entanglement and scrambling are all connected. And studying information scrambling will help us understand the limits of quantum information processing, which we need to develop quantum computers.

The proposed experiment would still be a lot slower than a black hole. Rey, the principal investigator, Lewis-Swan and their collaborators at NIST hope to add more complexity and increase its speed, going from rapid scrambling closer to the fast scrambling of a black hole.

The proposal was published on April 5, 2019 in Nature Communications. In addition to Drs. Ana Maria Rey and Robert Lewis-Swan, authors include former JILA postdoc Dr. Arghavan Safavi-Naini and Dr. John Bollinger of NIST.