Researchers have discovered a new property of light: self-torque 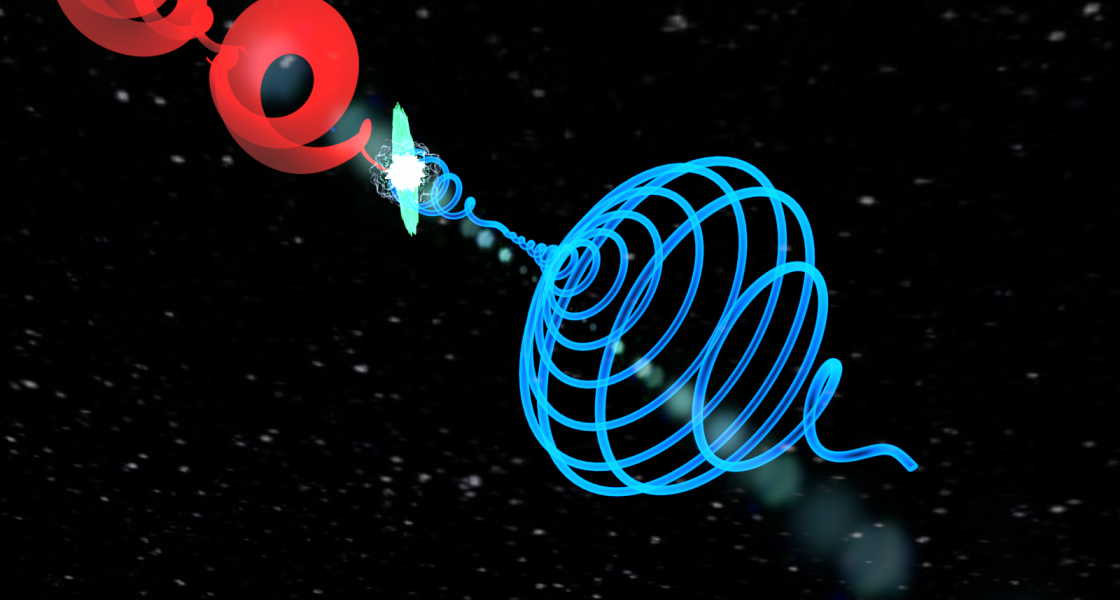 Hiding behind this optical croissant is a variety of unique physics.

What do whirlpools, black holes, hurricanes, Jupiter’s Great Red Spot, and the creamer you just put into your coffee cup have in common? All of these things exhibit vortex phenomena, in which a fluid (e.g., gas, liquid, plasma, etc.) circulates around a common axis. Vortices such as these abound in nature, and can be found in macroscopic systems like those described above, or in microscopic quantum systems. And we now know that they can be produced in extreme ultraviolet (EUV) light beams, thanks to an international team of researchers at JILA and in Spain.

In a recent publication in Science, students and scientists from the Kapteyn-Murnane group at JILA, along with theoretical collaborators lead by the Grupo de Investigación en Aplicaciones del Láser y Fotónica at the University of Salamanca and with support from the Institut de Ciències Fotòniques (ICFO), in Salamanca and Barcelona, respectively, showed that they could create very unique EUV vortices via the highly nonlinear process of high-harmonic generation (HHG). Specifically, by adjusting the temporal separation of the two infrared vortex beams, they could generate optical vortices in the EUV that twist faster, and faster, and faster as they are produced, creating an optical version of a whirlwind.

This optical property had never been observed before, leading the team to discover a new property of light: self-torque –– so named because its angular rotation, or momentum, increases with time.

Optical Donuts, Vortices, and the Orbital Angular Momentum of Light

Vortices in nature, like tornados, are highly chaotic and often unpredictable. However, in 1992 researchers in the Netherlands showed that vortices of laser light could be produced and controlled with high precision, and that these optical vortex beams possessed quantized amounts of orbital angular momentum (OAM). This new property of light, OAM, is associated with a spatial twist of the laser wavefronts, and manifests as a “doughnut-like” intensity pattern. If you’ve ever watched water spiral down a drain, taking whatever is in the water with it, then you’ve witnessed OAM in action.

Since the discovery of OAM light beams, they have found diverse applications in fields ranging from super-resolution imaging, optical communication, optical manipulation, and even quantum-based computational logic. But until now, the OAM of light has always been observed to be a static property which does not vary in time.

In order to realize this new optical property, the team exploited the quantum physics inherent to the high harmonic generation (HHG) process. High harmonics of light have a nice analogy with harmonics of sound - pluck a guitar string gently and the string vibrates, producing a note. Pluck it really hard and you can hear overtones, or harmonics, of that frequency.

To create that high harmonic generation with light, an intense, femtosecond laser pulse is upshifted to high frequencies of the driving laser by essentially creating a nanoscale radiating antenna from an atom that is in the process of being ionized. When properly phase-matched, bright, coherent laser-like beams can be generated that span from the EUV to the soft x-ray regions of the electromagnetic spectrum.

The HHG process is coherent, meaning it must conserve both energy and momentum during the upconversion process, which is the secret to creating self-torqued EUV beams. This breakthrough by the Kapteyn-Murnane and Salamanca groups showed that EUV light produced via HHG can indeed possess a time-dependent OAM –– and in doing so they have discovered self-torque, an entirely new property of light.

That self-torque is like a wrench speeding up as it’s tightening a bolt. However, this wrench is composed of photons and twists around faster than an electron orbits a hydrogen nucleus.

From Optical Donuts to Optical Croissants: The Unique Physics of Self-Torqued Light Beams
“Normally, when HHG is driven with a ‘doughnut’ laser beam, the conservation rules dictate that each harmonic has an OAM equal to the harmonic number times the OAM of the driving laser. However, if we drive the HHG process with a time-delayed pair of laser pulses possessing different OAM, then things get really interesting,” says corresponding author Kevin Dorney, a JILA postdoc who defended his Ph.D. thesis based partly on this work last month. “The time-delayed pulse pair results in the emission of EUV light with a time-varying OAM, which progresses smoothly through an octave of OAM states.”

As the OAM content dynamically varies along the EUV pulse, the light beam continues to accelerate and thus possesses a self-torque. Such a property is rarely observed, and nearly never controlled, and to date has only been observed in electrodynamics or predicted to be in certain gravitational waves.

The resulting, self-torqued EUV beams don’t look anything like a donut at all, but instead resemble a croissant. Hiding behind this optical croissant is a variety of unique physics.

As you move across the EUV croissant, the frequency varies – like different colored petals of a pinwheel spinning in the wind. This is known as an angular frequency chirp. That chirp is directly induced by the self-torque, which was key to confirming the generation of this new property of light.

“It was really quite beautiful physics to have the azimuthal [angular] frequency chirp encode the presence of a time-dependent OAM,” says JILA Fellow Margaret Murnane. “Without this connection, there would have been no way to verify the rapid, attosecond variation of the OAM, as such techniques simply do not exist.”

The research team at JILA took this idea and ran with it, and set out to measure the azimuthal frequency chirp. In order to do this, the team exploited the physics of OAM beams to precisely control the direction in which the self-torqued beams were emitted, and in doing so were able to measure the azimuthal frequency chirp simply by sending the beam into a spectrometer.

“Once we laid out the plan to make the measurement, I remember thinking it would never work. However, with a bit of perseverance and some serious engineering, we were able to pull off the entire set of measurements in less than a week!”, says Kevin Dorney. Even for a group that works continuously in the ultrafast lane, this was fast.

But the story wasn’t over yet. The research team went on to show that not only could they produce beams with a self-torque, but that the self-torque could be controlled by simply varying the relative delay between the two visible OAM pulses. The beautiful agreement with theoretical calculations from the Salamanca team verified the presence self-torque in the EUV light, confirming the generation and control of an entirely new property of light.

Looking forward, the international team of experimentalists and theorists are excited to see what opportunities might be opened up by light with a time-varying OAM. Systems with dynamically varying OAM, like binary black holes, appear in nature as well as in emergent materials systems. , The team believes that this new form of light can be used to observe and control some of the fastest nanoscale dynamics that nature has to offer, including magnetic and quantum excitations in molecules and nanostructures.