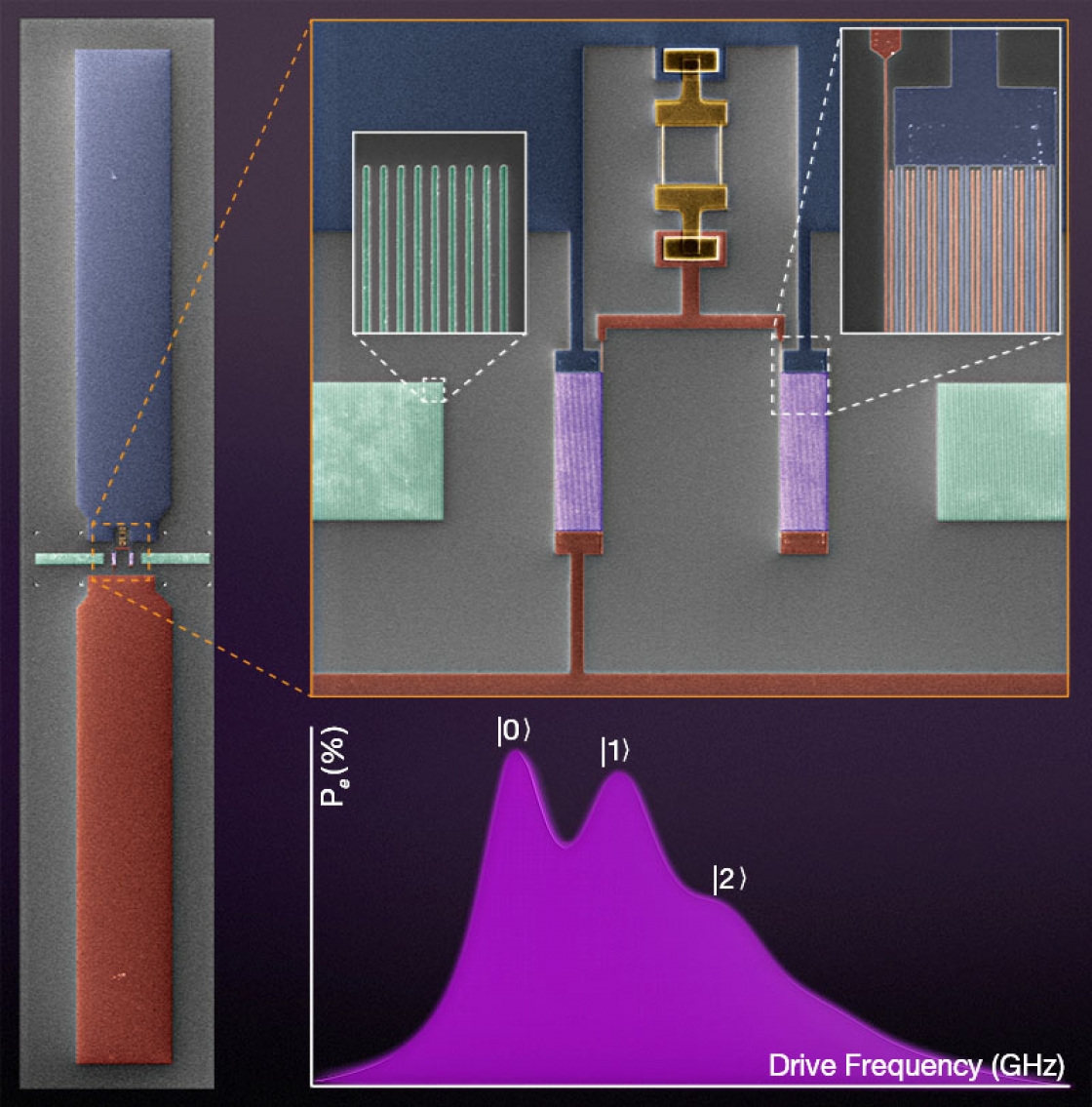 In the Lehnert Lab at JILA, a qubit sits in a small copper box. The qubit itself would fit on your pinky nail. Using that qubit, graduate student Lucas Sletten can measure the quietest sound in the universe: individual phonons, the smallest particles that carry sound.

This qubit is designed to help us answer two simple but profound questions: Can we control sound in a quantum way? And if so, what can we do with sound that we can’t do with light?

“People have been curious about using sound as a quantum technology for a while. It’s just difficult,” Sletten said. “[The qubit] lets you take your classical, grubby hands and do quantum things. It lets us see the quantum of nature of something which is normally linear and very classical looking.”

Hearing the quietest sound
“One phonon is the quietest sound,” Sletten said. The device lets scientists break a sound into its individual phonon bits, the quantized packets that make up a sound. The phonons Sletten focused on are 4.25 gigahertz, a frequency a billion times higher than what humans can hear.

So how do you hear the quietest sound in the universe? With a very sensitive microphone and speaker.

Their qubit was made on a piezoelectric material, which means any motion on the surface generates a voltage. As phonons travel across the surface of the chip, they create small voltages that are picked up by qubit’s transducer, which Sletten explained is both a microphone and a speaker.

To enhance the sensitivity of the device, Sletten uses two mirrors to create an echo chamber (an acoustic cavity) around the transducer. The trapped phonons bounce back and forth, passing under the transducer many times.

A sound advantage over light
A similar version of this experiment had already been done with light a decade ago, making this an “acoustic cover of an electronic hit,” Sletten joked. However, as sound is nearly a million times slower than light, the acoustic version can access new physics.

“This is not the race car of the superconducting qubit world,” Sletten said. “When you switch to sound, you lose a fair amount of things, but you also gain some cool stuff.”

“The slowness of sound let us build a cavity for sound in an on-chip device which would be really, really long if you made it for light,” Sletten said.

Why build an effectively long cavity? It has to do with the amount of quantum information that a device can store. The echo chamber has certain frequencies that resonate, similarly to the pitches you can play on a wind instrument. The longer the instrument, the smaller the difference between adjacent notes. (As a tuba player, Sletten is keenly aware of how tightly spaced these notes become when the instrument becomes very long.) Each acoustic resonance can independently store information. Thus, more resonances means higher capacity.

And that’s good news for quantum computers, which need a way to expand the computing power by adding more qubits. Sound could give quantum computers an alternative way to go from one qubit to many.

“If you can control the quantum state of the sound in these modes, then you can use these as your qubits,” Sletten explained. “And you can make more of them just by taking the mirrors and moving them apart. So, this gives you a different path [to go from one] to many.”

This study was published in Physical Review X in June.